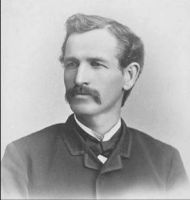 Unbeknown to most, Seattle’s bucolic Ingraham High School, home of the Fightin’ Rams, is named after a figure from Seattle’s history with a mysterious connection to local High Weirdness.

Maj. Edward Sturgis (E.S.) Ingraham (pictured) was the first Superintendent of Seattle Public Schools, the mountaineer founder of the local Alpine Club, and well-regarded Seattle socialite, as well as a huge fan of our beloved local volcano Tahoma (aka Mt. Rainier).  Not only did he accompany naturalist John Muir to the summit of the mega-volcano, he also used his local influence and scientific creds to help push for making it a National Park.

However, it’s what happened during his expedition to the summit in 1895 that interests us.

Tahoma has long been associated with spooky goings-on. In 1947, aviator Kenneth Arnold witnessed a group of mysterious objects flying near the summit– the case became one of the first sensational UFO stories. In 1994, a local teenager had a terrifying encounter with a creature now known locally as “Batsquatch.” The mountain is so sacred to local indigenous Nations that early white settlers had difficulty finding native guides who would take them to the top. 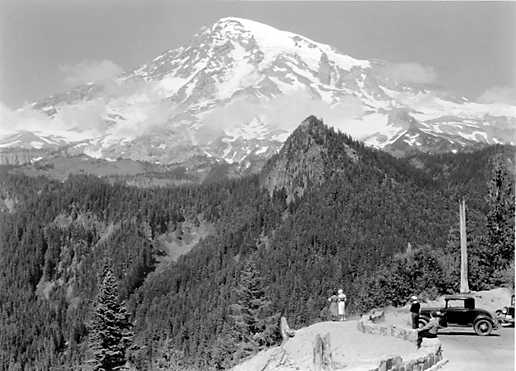 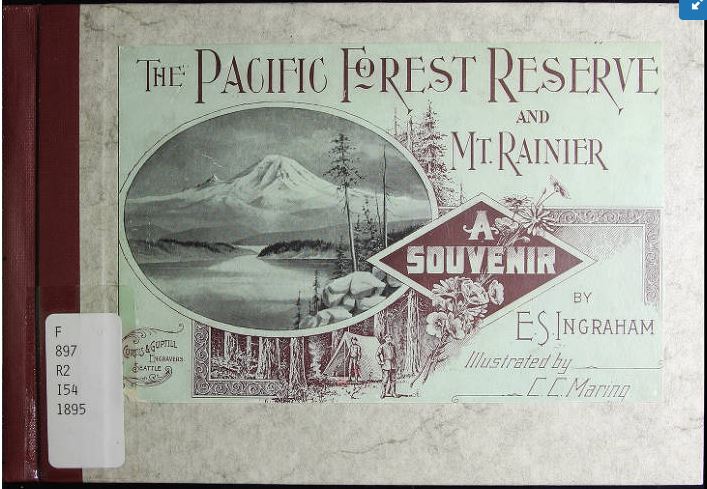 Ingraham’s account, however, may take the proverbial cake for the weirdest tale from Tahoma’s slopes. In his account, which he published in The Pacific Forest Reserve and Mt. Rainier, begins with the observation of some mysterious scratches on the walls of a steam cave:

“While my companion and I were exploring the steam-caves at the time of my second visit to the crater of Mt. Rainier, I noticed peculiar marks and scratching on the floor of the cave. In some places the ground appeared as though it had been the scene of a conflict between some maddened beasts, so extensive was the disturbance. In other places there were depressions that might have been made by some flat-footed animal pawing in the earth.”

He also reported a strange glow in the cave, coupled with

“…a peculiar sensation of the body, such as the pole of an electrical machine slightly charged.”

Deciding to revisit the cave on his own that night, he crept from his tent and began descending into the depths below. Hearing a noise above, and wondering if perhaps his travel companions had the same idea he did, he stepped into a wall in the recess. What happened next astounded him. What follows is an unedited excerpt from The Pacific Forest Reserve and Mt. Rainier:

I had not long to wait, for almost immediately there came, now rolling, now making an attempt to crawl, a figure of strange and grotesque appearance, down the passage. It stopped within a few feet of me, writhing and floundering very much as a drowning man would do, when drawn from the water he was about to sink for the last time. Its shape was nearer that of a human being than of any other animal. The crown of its head was pointed, with bristled hair pointing in every direction. The eyeballs were pointed, too; and while they appeared dull and visionless at times, yet there was an occasional flash of light from the points, which increased in frequency and brilliancy as the owner began to revive. The nails of its fingers and toes were long and pointed and resembled polished steel more than hardened cuticle.

I discovered that the palms of its hands and the soles of its feet were hard and calloused. In fact, the whole body, while human in shape, except the pointedness of the parts I have mentioned, seemed very different in character from that of the human species. There was nothing about the mysterious being, however, that would make it possible that it’s ancestry of long ages ago might have been human beings like ourselves. Yet by living in different surroundings and under entirely different conditions, many of its characteristics had changed.

By degrees this strange being began to revive. Gradually an electric glow covered the entire body with light-centers at the ends of those pointed nails, the eyes and the top of the head. It seemed to accomplish it’s revivification by rubbing it’s hands vigorously together. As soon as it was able to stand, it began to rub its feet rapidly upon the floor of the cave. This increased the glow of its body and caused the light-centers to shine with increased brilliancy. It seemed to receive some vital fluid from the earth that at once gave new vigor to its whole system. Involuntarily I imitated its actions and immediately found myself undergoing a very peculiar sensation. I seemed to be glowing in accord with the strange being who then for the first time noticed my presence. He at once redoubled his former movements. He would rub his hands vigorously together and then quickly extend the points of his fingers in my direction when sparks of light would dart therefrom.

Having become deeply interested in this strange exhibition, I went through the same maneuver with a similar result although apparently in a much lesser degree. The effect was magical! I was becoming en rapport with the Old Man of the Crater! I could see a brilliant point of light gradually forming on the crown of his head. Feeling my own hair beginning to rise, I removed my knit cap and felt my hair bristling upward to a common point. The light from his crown seemed to form an arch above and between us and WE WERE IN COMMUNICATION.

There, in that icy passage connecting the unknown interior of this earth with the exterior, by means of a new medium, or rather an old medium newly applied, two intelligent beings of different races were enabled to communicate, imperfectly at first of course, with each other.

For an hour I received impressions from the Old Man of the Crater. It is a strange story I got from him. While the time was comparatively short, yet what he told me, not by voice or look, but by a subtle agency not known or understood by me, would fill a volume of many pages. Finally expressing doubt at what he communicated, he commanded me to follow him. I had anticipated such a demand and was ready to resist it. So when he turned to descend, to the hot interior of the earth as I verily believe, by a superhuman effort I broke the spell and hastened upward and back to my sleeping companions.

This is no myth. The old man told me of his abode in the interior, of another race to which he belonged and the traditions of that race; of convulsions and changes on the earth long, long ago; of the gradual contraction of a belt of matter around the earth until it touched the surface hemming in many of the inhabitants and drowning the remainder, and of the survival of a single pair. All was shut out and the atmosphere became changed. Gradually this remaining pair was enabled to conform to the new order of things and became the parents of a race which for want of a better name I will call Sub-Rainians. This Old Man of the Crater had wandered far away from the abode of his race in his desire to explore. Far away from my home we had met, each out of his usual sphere.

This is one of those cases where “more questions than answers” is certainly the only possible solution. Although this case remains relatively unknown– possibly BECAUSE Ingraham is so well-regarded– a few have theorized that the Old Man was perhaps a Sasquatch. Others conjecture that it may have been a metaphor for the initiate rite of Freemasonry, as Ingraham was a member of that organization. Some think maybe he was “high on fumes, man,” but that doesn’t seem like a plausible explanation to us.

What did the Old Man communicate to our erstwhile explorer in that liminal space between worlds? Why didn’t Ingraham compose that “volume of many pages” with the information delivered by the creature?  Subterranean civilizations a la Bulwer-Lytton’s Vril were de rigeur at the time, as were the chthonic mysteries of Theosophy and Rudolph Steiner. This Hollow Earth thread goes right through Richard Shaver and his Deros to the Kentucky Goblins featured in the recent documentary Hellier, but can certainly also be traced back in time, to the Delphic Oracle, Indigenous myths of the Americas and Australia, and the cave art of “prehistoric” Indonesia and France. It appears we have always been accompanied by denizens of the Hypogeum, but few of us have been lucky enough, like Ingraham, to have met one in person.

What Is A Liminal Map?

Spooky things happen every day all around us! Instead of brushing these peculiar moments and bizarre encounters off as chance, or mere coincidence, what if we talked about them, mapped them, and tried to decode the message? Is there a specific place where you've seen fairies, ghosts, bigfoot, time travelers, extraterrestrials, ultraterrestrials, crow conferences, sentient lawn computers, lanyard'd ogres, broccoli wizards, etc.? Does your town have an urban legend you'd love to get to the bottom of? Send us your story and we might include it on our map!   liminal.earth/submit

Friends of the Map

About The Liminal Earth Society

Liminal Earth (originally Liminal Seattle) is a curated map maintained by the Liminal Earth Society. The LES cannot officially guarantee the veracity of the accounts noted hereon, but encourage exploration and investigation. We welcome submissions from from denizens of all realms.  You can join The Liminal Earth Society and help support our work at http://patreon.com/liminalearth. Membership starts at ONE DOLLAR!

Email us if you have any questions: info@liminal.earth